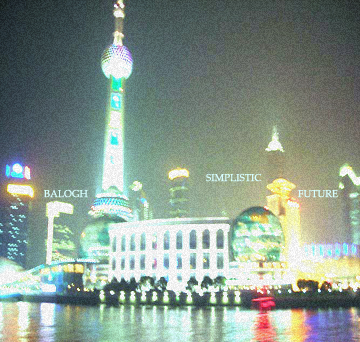 Reviewer: S.E.W. - - January 16, 2013
Subject: Review By: Yeah I Know It Sucks (Alex Spalding)
I thought I’d take a moment’s pause from reviewing SP Net releases to do one for Sirona-Records. I flipped aimlessly through the annals of their web-discography until I found an album that just seemed to want some attention. It’s a lonely world sometimes for net releases. Just looking at the Discogs page for this lovely album almost makes you want to cry. Let us press forward instead with stoicism and attempt to right this injustice, like Sam Beckett in Quantum Leap…

Speaking of Quantum Leap, it might take one to get started here. While some of this is depending on the development of your own audio palette as so-called “Nu Jazz” is a broad, ill defined category at times, most of us have a pretty good grasp on what we expect when we hear of or see that descriptor in print. It’s the “not-your-dad’s-jazz” that gets played in the “not-your-dad’s-coffee-shops” by ineffectual pseudo-intelligentsia snobs who seem, suspiciously, surreptitiously, like your dad after all. So I’ll ask you to cast aside whatever predilections you’ve been cultivating and give this album a chance. I’ve found a better vantage point from which to hear this thing anyway… so come, join me won’t you?

… alright, we’ve made it. This is what I was wanting to show you: (_)_)IIIIIIID <- I know, yes, it looks like a penis, but it’s actually two web links. Clicking on either of the two balls takes you to the Discogs page for the album that the single you can access by clicking on the shaft or tip was released on. I only bring this up because it was the first thing I thought of when I started listening to Simplistic Future. And, what’s more, I think I like Simplistic Future better. It’s wilder in some places; more subversive, and kinda pretty. I’ve been listening to the first two tracks on this album (‘Gliding….Sometimes’ and ‘Foreseeing An End’, respectively) and going back and forth between these two ways of thinking about this album, the one being as just a Nu Jazz thing among many and the other being a sort of weird type of other thing that wants you to reject labels as missing the point. But I wanted to illustrate somehow my brainwave while I was listening to and analyzing this album, just in case I sound like I’m coming from out of leftfield at any point. These tracks do much to get you into this idea of a simplistic future. Perhaps it is an alternate vision of the now, without Apple and it’s evil army of iBots. Maybe a world saturated with Amiga? A ColecoPolis? Or maybe it’s a statement on where we are heading with our corporations and dependence on liberty-stifling technologies? I don’t know, but maybe… I need to listen to the rest of the tracks on this album before I can decide on the overall message or intent of this.

Track 3 is titled ‘Pursuing Normality’ and, in terms of sound, it does literally the opposite. Frantic, midi-synchronized melodies play along while phased drums jam out. The track remains very nice sounding and moves in a way no one could call predictable, but no one would dare call incoherent either, like IDM.

Track 4, ‘Stars, Galaxies And Universes’ is the kind of ambient track a drummer might make. There’s a martial quality to the music. The melodies and bright pads feel like the soundtrack to some lost Squaresoft game for the SNES. A handful of sonic effects come in on occasion to mix things up just enough that nothing ever gets too monotonous.

‘Cyber Cat Blues’ is, in a word or two, badass, despite how near-ridiculous it is. It’s a downtempo track with monophonic leads that would be beautiful if they weren’t so determined to be silly 2/3rds of the time. It works though, like some kind of batshit crazy magic. One thinks of… cyber cats. What else?

Things get hairy and downtuned on ‘The Complexities Of Simplicity’, probably the sore thumb of the album. Because it starts off sounding like a sore thumb, that is. The eventual synthesized melodies liven things up quite a lot, as do the pot & pan percussion sounds that creep in shortly after. Then the thumb starts hurting again for the breakdown section. It was still some fun hearing it, but made me think of monkeys in clown suits, which is never a good sign. Well… rarely a good sign, I should say. Thankfully, the track ends on a nice note, with some lovely leads and R2-D2esque bleeping.

‘Proven Groove’… is more or less trying to prove what has already been demonstrated elsewhere on the album (strong sounding monosynths glide around nicely, semi-chaotic drum breaks go off the beaten path, some electronics blurt out on occasion), but less effectively. It feels like filler.

Then, rounding off the album, we have ‘Symphonic Slide’, the secret weapon. Just when I was starting to think this was going to be one of those albums that starts strong, gets slightly better, and then just quickly goes downhill the whole way from there, this track hits and you realize that instead this is one of those albums that appears to do that but then has a pretty good track at the end that might maybe be on par with tracks 2 or 3… because it’s not the strongest track, except in relation to the two before it. It’s not bad either, though. Shit does get pretty weird throughout much of the middle of the track though, meandering seemingly as though it can’t decide if it can go anywhere else before ending.

All things considered… this album was a lot of fun to hear. It probably could have been condensed to just the first 5 tracks and I wouldn’t have minded, I think as a whole it loses some of it’s appeal by sacrificing it’s quirky-electro spontaneity to a more superficial eclecticism in the last 3. It’s something I would recommend checking out anyway, though, because these flaws are slight enough to make you feel like it was a worthwhile experience.